just one of the tables filled to the brim

I am really lucky to live in a such a great neighborhood. Within just a few blocks I can visit the best cheese store in the DC area, a top-notch butcher who sources everything locally (except the kangaroo, of course),  unbelievably good frozen custard, a dynamite neighborhood bar and restaurant, a weekly farmer’s market, and countless other great eating options (and all of them are local, non-chain businesses run by my neighbors.)

I’m also lucky to live in a neighborhood full of creative people who care about their neighbors and this community. One such example is the Empty House Studio, a temporary space for artists to create and share. Well, this past weekend they hosted a neighborhood food swap organized by the folks at DIY Del Ray, a blog written by some other neighbors that focuses on all sorts of neighborhoody and non-neighborhoody things alike.

Being wholeheartedly committed to the DIY food movement (as readers of this blog will no doubt recognize), I was excited to finally participate in one DIYDR’s regularly scheduled events.

If you’ve not been to a food swap before (and I had not), here’s basically how it works. Bring any number of things you want to share and swap. Check out what everyone else brought and decide what you’d like to trade for. (But remember, you can only trade as much as you brought.) And then let the swapping commence in fairly informal fashion as you meet the producers and negotiate your deals. My betrothed and I came prepared with loaded rice krispie treats, a boxful of canned pickles from the summer, and crusty rolls (using the no-knead recipe from Jim Leahy’s book) to swap. And we left with a boatload of stuff in exchange.

It seems we have a lot of similarly minded neighbors creating some unbelievable stuff. I was blown away by the diversity of what people brought. There were even some local sponsors – neighbors who have their own cake and fermented pickle businesses. Here’s a list of some of the most impressive stuff, a lot of which we came home with. And there was so much more.

There was so much stuff that we were looking for any flat surface for display of everyone’s goods.

Besides our bounty, it was also great to meet a lot of unfamiliar faces that make up this great neighborhood. It was just an excellent way to spend a Saturday afternoon. Can’t wait for the next one.

There will likely be no more ripe tomatoes this year. At least not any from around here. The days are shorter, the nights are colder, and it’s only a matter of time before the squirrels or other local rodents devour what remains of a patio garden past its prime.

We’ve established I love pickles. When I think of preserving, it’s the first preparation I turn to instead of just simple canning or jamming. I’ve covered what to do with the remaining herbs and peppers. The last thing are the little cherry tomatoes that didn’t make to full ripeness in time.

I pulled of the remaining couple of handfuls of tiny green tomatoes, mixed up a simple brine of half water, half white vinegar, a teaspoon of sugar, a tablespoon of salt, and a teaspoon of some pickling spice from the Ruhlman Charcuterie book (that I used earlier in the year to make corned beef.) And that’s it.

OK, I like pickles, you get it. I like just about anything pickled (though a pickled egg makes me a little nervous, admittedly.) Along with a traditional dill pickle and spicy romano beans (a recipe I promise to cover next time these big fat romano beans come around,) pickled peppers are near the top of my list. I have early memories of eating pickled hot cherry and pepperoncini peppers straight from the jar as a kid. Still today, I’m a sucker for those ubiquitous jarred bright green pepperoncinis.

A couple of years ago I grew habaneros and jalapenos on my back patio and pickled a small jar of them in vinegar and salt. After months, I was afraid to open the jar in fear of dripping any of the lethal, nuclear-hot liquid and burning a hole in whatever it touched. Nonetheless, I always had a great addition to salsas and chilis hiding out in the back corner of my refrigerator (so as not to accidentally brush up against any of the other fridge inhabitants.) 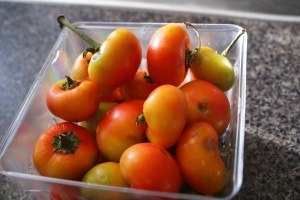 The other day, Michael Ruhlman tweeted a link to an old blog post he wrote about using Michael Symon’s recipe for pickled chilis. When I came upon a generous pint of brightly colored cherry bombs at the Crystal City farmer’s market, I already knew exactly what I was going to do with these.

In our backyard patio garden, among the tomatoes and copious herbs, we’ve got two little pots that have been producing pepperoncini and jalapenos at a modest rate. There is one major issue with these peppers, however; they are not hot at all. Would make for a great parlor trick — bite into a bright red jalapeno and eat it whole, amaze your friends with your tolerance for the blazing heat, knowing all along it’s as mild as a bell pepper. With a handful of these still on the branches, I figured I’d throw these into the batch and hope the cherry bombs bring enough heat to spread around. While I was at it, I threw in some backyard thyme, too.

Handful of homegrown jalapenos and pepperoncini

The recipe is real simple and took about 10-15 minutes from beginning to end. Put your peppers in a jar. Heat your brine. Pour brine over peppers. Michael Symon’s recipe called for specific herbs and spices, but I just used what I had on hand. I’d recommend the same. I’ve provided what I used, but feel free to improvise and vary the flavors. Try a different vinegar or herbs. 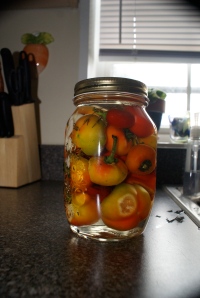 Eat these right out of the jar and slice and use for garnish or anywhere you’d use a hot pepper.

Since I just put these up, it’ll be a few weeks until they hit their full potential, so I’m holding on trying them for at least a couple of weeks.

Old school kosher dills are one of my favorite go-to snacks. They’re fresh tasting and crunchy and salty. I almost always have a big jar in the door of the fridge. This dead simple recipe was adapted from Mark Bittman’s How to Cook Everything. Having made these countless times (almost every 2 weeks for the last 4 years which I guess puts me close to consuming about 200 pounds of these,) I’ve got this recipe and technique fairly down-pat. And once you do, you can make all sorts of interesting adaptations. I think these are as good as any deli pickle I’ve had, and dead simple to make.

Pickles and salt
There aren’t a lot of ingredients to this recipe, so choose wisely. Not all cucumbers are the same. For these, and most pickles, you need pickling or kirby cucumbers. They usually look like stubby, bumby little cucumbers. Slicing or english cucumbers just won’t cut it in this recipe. The pickling cukes stay firm and crisp once brined, the others just turn mushy. I opt for small ones, about 3 inches in length. (If you can find really really small ones forgo this recipe and make cornichons instead.) My local farmers markets have these most of the summer, and my local Whole Foods usually has them year-round, as well. This recipe calls for 2 pounds, but I never bother weighing. I just picture how many are going to fit in the jar I’m going to use.
As for the salt, I use Morton’s Kosher because that’s what most of the stores around me carry. I learned that not all salts are the same after reading Thomas Keller’s Ad Hoc at Home. If you’re using Diamond Crystal or some other brand, make the appropriate substitution. Bittman’s recipe called for more salt than I use, but I found the end results far too salty. Through trial and error, I arrived at the basic formula below.
Adaptations
Besides cucumbers, salt, and water, this basic recipe calls for dill and garlic as traditional flavorings, but there’s no reason not to experiment. Try some other fresh herbs like tarragon or parsley or chives for a different herbal profile. Throw in some peppercorns or red pepper flakes for some heat, or my favorite variation, jalapenos. You could add some white vinegar for a little extra sourness, though these tend to sour as they ferment, anyways. Go crazy.

Cucumbers in their brine after an overnight soak on the counter

It’ll take a couple of days for these to reach the right level of pickle-ness, but start trying after a day. They’ll stay good for several weeks. After a month or so, they get a little mushy, but actually the texture isn’t that dissimilar from what you might buy in a jar. But, if you’re like me, these won’t stick around for that long anyways.