When life gives you lemons, make smoked trout, or something like that. With a forecast of just-a-chance-of-rain, I decided to risk it and plan a whole day of smoking for Sunday. Saturday, I picked up a small brisket, some trout fillets, and prepared a brine for the fish. Come morning, I’d planned on waking really early and firing up the smoker, since the brisket could take 8-12 hours. 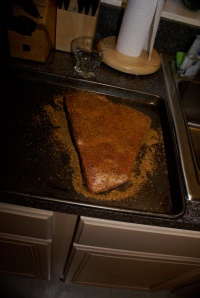 Brisket gets a rub-down in Pork Barrel BBQ rub

Alas, I awoke to a light, but steady rain. Plan B, start the brisket in the oven, and wait for the rain to clear. After rubbing the brisket in my favorite rub, Alexandria-locals Pork Barrel BBQ, I wrapped it in foil and threw it in a 300° oven. Meanwhile, I set the trout fillets in the brine I made the night before according to Michael Ruhlman’s Charcuterie to sit for a couple of hours.

Trout fillets in their brine

After a couple of hours, I figured I’d brave it and fire up the smoker even though the rain was still coming down. I followed my usual routine of dumping in some unlit charcoal and applewood into the fire ring of my Weber Bullet and starting up the chimney. When the coals in the chimney got white-hot, I dumped them on top of the unlit coals and setup the smoker. After an hour, the smoker still hadn’t come up to temperature with the wind and rain still blowing. So, continuing on with Plan B, I ended up leaving the brisket in the oven for a little over 4 hours until it hit 205°. I left it wrapped in the foil on the stove to rest. Meanwhile, I had removed the trout from the brine after a couple of hours and left them to air-dry for another 2 hours.

I still hadn’t figured out what I was going to do with the trout since the smoker was not cooperating. I was actually considering battering and frying them. Then I had the bright idea to remove the middle section of the smoker and put the fillets on a grill right over the smoldering coals. Sure enough, the temperature ended up being just right going this route. 45 minutes or so later, the fillets hit 140°, and I had two pretty tasty smoked trout fillets, pretty much just as I imagined them when I first unwrapped this smoker last Hanukah. One of these will be breakfast on a bagel for the next couple of days. The other is vacuum-sealed in the freezer, awaiting a Sunday brunch. 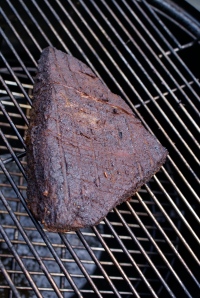 Brisket gets a touch up in the smoker

I reassembled the smoker just to see if the whole thing could come up to temperature, so that I might add some smoke to my already cooked brisket. Sure enough, it took just a few minutes to bring the whole thing up to the optimal smoking range. So about 5 hours later, I finally throw that brisket on. It’s time in the oven and subsequent resting produced a very moist and tender brisket, but I wanted to see if I could a add little bit of a bark on it by smoking it for a little while. Indeed, 2 hours later, the crust of the brisket crisped up quite a bit, and while the smoke flavor was not very predominant, I still ended up with a delicious, tender barbecued brisket.

Wind and rain be damned. (And wouldn’t you know it? Some 8 hours later, the rain has cleared, the sun has emerged, and I’m struggling to get the smoker temp back down!)

I won’t bother providing much of a recipe, since today’s go wasn’t quite the way I would normally do it. Basically, rub that brisket down in your favorite rub, and hot-smoke it for 8-12 hours until it hits an internal temp of 205°. 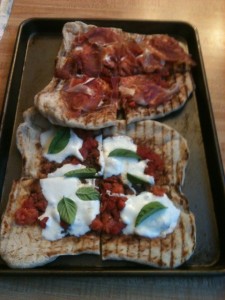 Fire up that grill and make some pizzas! It’s really not that hard.

Slice up a couple of tomatoes (about 1- 1 1/2 per pie) into 1/4″ slices. Put them in a bowl with some salt, herbs, oil, and vinegar. And just let them sit for an hour or so until you’re ready to grill. When the grill’s ready, throw the tomato slices on and grill each side for a couple of minutes, so that get some char and get soft. Throw them back in the bowl and mash the slices, so end up a chunky sauce.

I’ve used lots of different recipes in the past for pizza dough. I’m quite partial to the one in The Bread Bible

which is very wet dough that results in the great combination of thin and crispy and airy and doughy. The Jim Lahey No-Knead Method

works, too. But, I’ll confess, this time around, I just picked up some dough from the Italian Store. Whichever way you go, roll out your dough so it’s pretty thin and about 12″ in diameter (make sure your grill can accomodate) and set it aside to proof for at least an hour. I let my uncooked pies rest on an oiled cookie sheet.

Anything that works on a regular pizza will mostly work on a grilled pizza. Remember, you’re going through the trouble of firing up your grill, so maybe you might want to grill some of those toppings too. Grilled peppers, onions, zucchini? All good. You can use any shredded cheese you would normally use. If you’re going to fresh mozzarella route, like I did, I suggest cutting it into slices and squeezing out any excess water, by laying them on a plate covered in paper towel, set a another plate on top of that, and then weigh down the top plate.

Get that grill good and hot. First thing is to grill those tomato slices for the sauce. And then any other toppings you’re going to grill. From here, it’ll go pretty quickly. Take one of your rolled doughs (or however many will fit on your grill at once) and lay it on the grill. Just let it sit for at least a minute without moving it. Then take a peek at the bottom to see how it’s doing. Feel free to move it around if the heat of grill is inconsistent. You’re just grilling the one side for now. It should get pretty dark, even black in some spots, but don’t burn it. Depending on your flame, this should only take a couple of minutes. Once that once side is done, pull it off and lay it back on your cookie sheet cooked side up. On the cooked side, spoon out your sauce, apply your cheese and other toppings. Then back on the grill to cook the bottom side. This will take just as long as it took to cook the other side. It goes so quickly that I usually don’t bother putting the lid on. And that’s it. Pull that sucker off, slice it up, and enjoy.

The pizzas I made above were almost identical except one got some fresh basil tossed on after cooking. The other got some excellent Surryano ham from Surry Farms, in Surry, VA. A proscuitto-like ham, except it’s smoked. Really good.