It came time to plan an outing for a milestone of a birthday, I started from a very short list. I first started with some regions and got it down to New Orleans, San Francisco and Napa, or New York. It didn’t take long to hone in on New York but still there was some more work to be done. I’ve always pined for a Thomas Keller meal, but Per Se and the French Laundry seem just out of reach for me. Three summers ago, I had one of my all-time favorite meals at Blue Hills at Stone Barns and have always imagined what they would do in different seasons, so this was the fallback plan. The backup plan if we weren’t able to secure reservations to a pretty new place called Blanca which sits in the ramshackle compound of Roberta’s a pizza place for those in the know out in Bushwick. And with a little bit of effort (none of my own doing, thanks to my companion who manned the phone) and luck we secured 2 of the 12 seats available for my birthday night. And for a month the anticipation grew and grew as I read the handful of reviews and reports from the past year since it opened.

They ask that you check in at Roberta’s, then lead you through what looks like a cross between a construction zone and a junkyard. But then you arrive at a separate building that is at once austere, serene, yet fully comfortable. Clean, cream colored walls, cushy leather backed stools at the counter facing the steamy, smoky both hi- and low-tech (and always calm) kitchen, and Sticky Fingers blaring from the turntable. 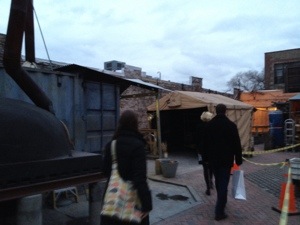 Then the relentless begins. I won’t even begin to describe every dish. I couldn’t if I tried. When trying to recount after the fact, at first I forgot some of my favorite dishes. That’ll happen when your head is swirling deep into a tasting menu of 25 or so courses that come like clockwork over the span of 3 hours. Oh, but before I mention a few of the dishes, let me mention the service.

It was perfect. The right combination of attentive, informative, conversational, and absent. There and helpful when you need them, and helping someone else when you don’t. Like a great host at a party. The service really is part of the whole package, creating a really relaxed and fun environment.

But now back to the menu highlights.

It started with a slew of seafood dishes including a plate of 5 different raw preparations, each one better than the next. Needlefish, geoduck, herring, horse mackerel, and sea perch, each with their own garnish. A real microcosm of what the kitchen excels at. There were lightly breaded and fried veal sweetbreads with lime that were definitely the best sweetbread preparation I’ve ever had. Deep in my memory banks, I’m recalling perfectly tender squid, though I’d be hard-pressed to remember what else was on the plate. Shortly after that there was possibly my favorite savory dish of the night, thinly sliced strips of barely grilled Wagyu in a sweet kohlrabi broth that reminded me of sukiyaki. The paper thin, fatty beef literally melts in your mouth as you eat it. At some point deep in the middle of the evening we were presented with the simplest presentation of the night. A giant king crab leg still in its shell and a large dollop of plankton butter. And a hot towel to clean up with. A perfect dish for a kitchen that tries (and succeeds) so hard to present the most elegant and exquisite dishes and plates and presents them in the least stuffy way possible.

There was a string of pasta dishes, including hand-rolled pici with squab and a single ravioli filled with nduja – a spreadable spicy salami. There was a course that was just bread and butter. But of course, it was 4 different breads and homemade butter. After about 15 courses, I thought this was going to be the end of me, but it actually invigorated me for the home stretch.

In between some key transitional courses, there were some palate cleansing sorbets and granitas. Most notably, a celeriac gelato with lime gelee that tasted exactly as you’d expect and want. And a buttermilk sorbet with Meyer lemon marmalade.

For the meat courses, there was a chicken dish that we watched all night as the whole bird – head and feet included – spun around in the oven for an hour, then was grilled on a yakitori grill – meat and skin separately and served on polenta. Obviously, the skin was the best part. And then another Wagyu dish for the ages. Aged New York strip cooked rare and sliced, served with radish, and a sauce enriched with melted beef fat.

Finally dessert was the real surprise of the night. Following a cheese course of runny La Tur atop a lemon jelly, there were just a couple of similarly presented dishes but they might have been two of the strongest dishes of the night. The first is a contender for my all-time favorite dessert and absolutely one of my favorite dishes of the night. An orange sorbet sat atop a rye “foam” that reminded me of a zabaglione with crunchy rye berries sprinkled on top and a surprise dollop of caramel along the bottom. Totally amazing and wholly new. This was followed by an almost equally strong dish of apple ice with a thick sunchoke puree, dehydrated sunchoke chips, and some sort of sunchoke dust. Both desserts were complex, not single-note sweet, and completely unlike anything you’ve ever had before.

So I enter a new chapter of my life noted arbitrarily by the calendar, I am thoroughly nourished and possibly changed forever by this meal, now more than 24 hours and a so-so night’s sleep in the past, that still has my head spinning trying to figure it all out.